All your development needs in one place.

Reach Radio, also known as Reach, is an online, internet radio station made by members of the Simulation Community. Reach is run by a team of talented members and presenters in the community. I was first approached by Arran one of the founders of Reach and was asked if I would like to join the team by helping to create a website. I have been privileged to be able to work with Reach since July 2020 where my duties have expanded provide them with multiple website design from a dark mode, halloween theme, christmas theme and a new years theme. 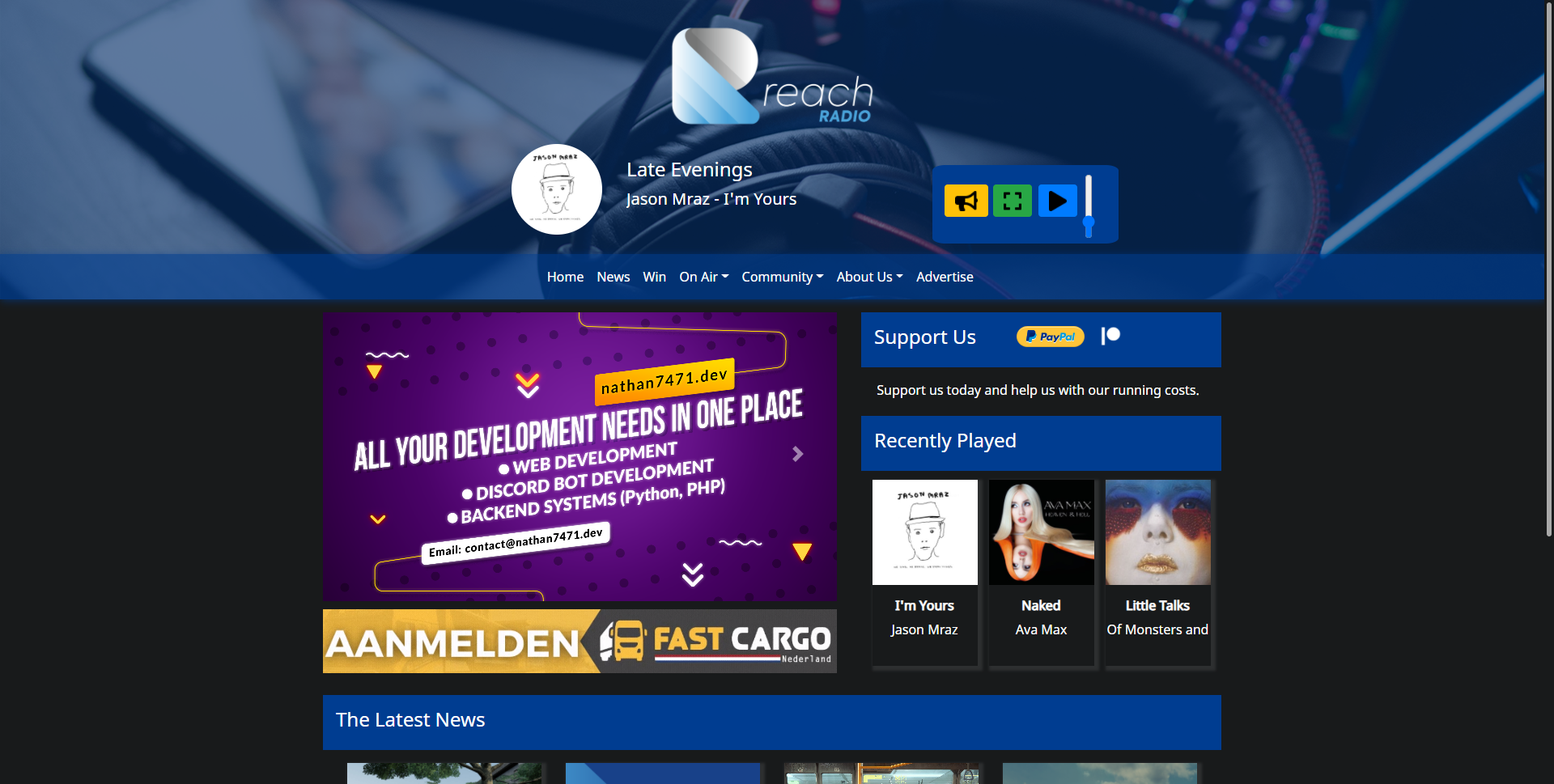 This is the second version of Reach Radio site, to be released in January 2021. We have decided to moved towards a move professional looking site like an FM or DAB station would have. We have also moved away from the boxy design moving towards more of a modern look. I hope to bring many more featues to the site in the future. We have also updated our team page by adding a Shows & Presenters page link the station's Presenters with their weekly shows. You can access the site here.

Drive For Life is a online community convoy based on the TruckersMP Platform to raise money for many different charities by driving for 24 hours. I was first approached by Jogr to create a brand new site for their 5th year anniversary. I have been working along side Drive For Life since January 2021 where I have provided them with a responsive website allowing users to see the history of the event, truckfest slots and availablity, route information and their partnered streamers. I also build a panel where the management team can track truckfest requests and deal and process them, add route information and provide streamers onto the site. It has been great working along side Drive For Life and hope to continue to provide new features in the future. You can access the site here

BHF Event was a online community convoy based on the TruckersMP Platform to raise money for British Heart Foundation by driving for 12 hours. I was first approached by Veuxs the founder to help with the planning of the event and the responsibility of designing and managing the website. The site provided users with information about past events, truckfest information, route information, streamers and how to donate. You can access the site here 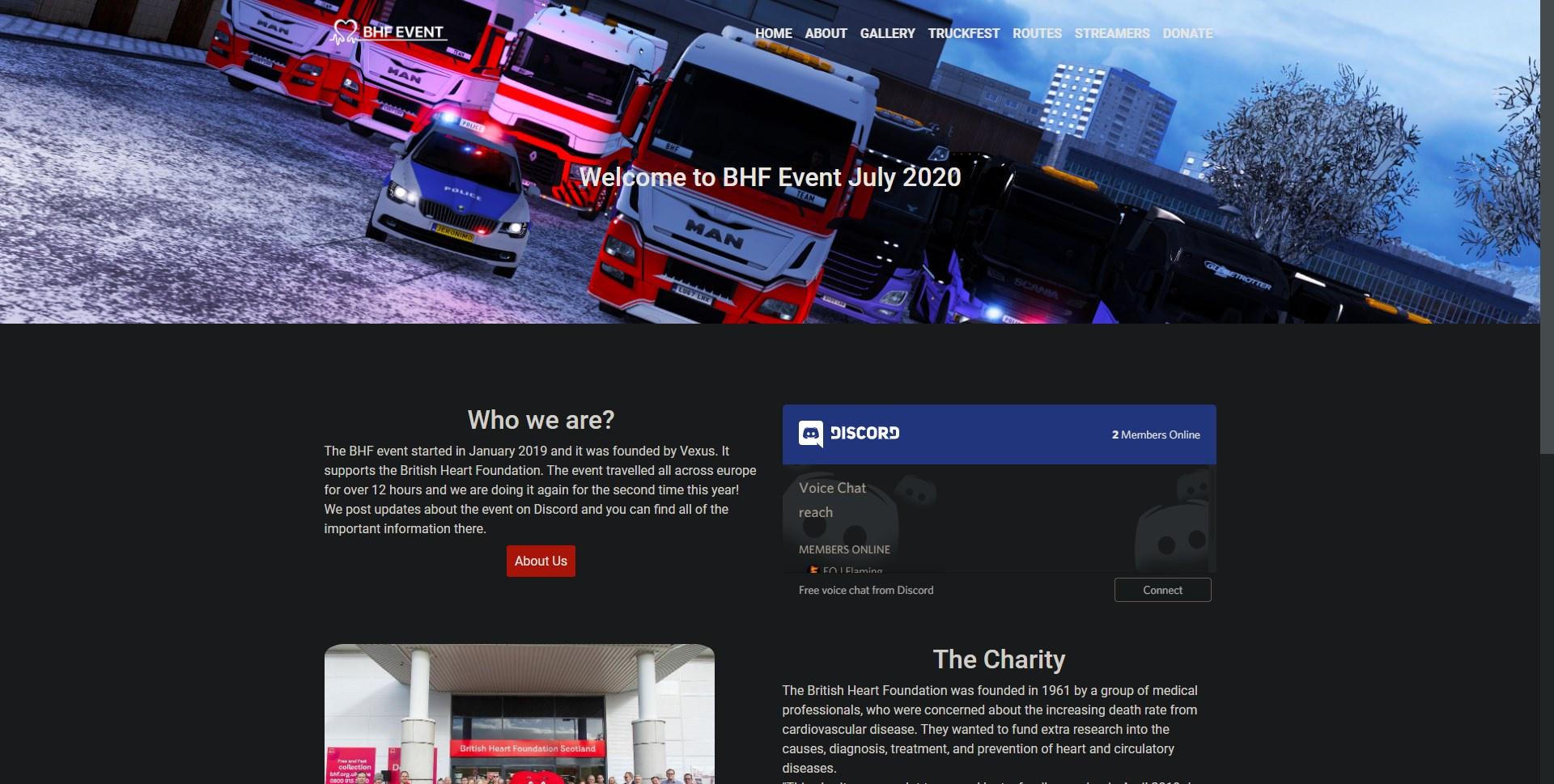 Mid 2020, I was approached by Arran and Joseph the founders of Reach asked me to develop a Discord Bot for their Discord Guild. Working along side Matt from the development team at Reach Radio, We have developed a bot which allows the user to listen to the radio in their discord server, post gifs, find out what show is currently live, find out schedule information, send in shoutouts. Behind the scenes, the bot logs many different things that happens in the Discord Server, the bot also allows for the moderation time to kick, ban and warn players and send announcements into channels.

Mid 2020, I was approached by Arran and Joseph the founders of Reach asked me to create a Discord Bot that listeners could invite into their own servers. We developed this bot which allows the listener to get the latest news posted by Reach Radio, play the radio in their own Discord Server, provide recently played songs, find out current song, find out the current presenter on air. The bot also provides TruckersMP traffic data via Trucky which allows listeners to see the busiest places in-game before entering the game. The bot tracks the number of listeners that our listening to the radio via the bot, can provide guild information for our sales team and has a built in audit log system where commands are logged into our system so errors can be tracked and users can be blocked for abusing system.

I approached WARP Convoys about providing them with a bot allowing them to reduce their time and make their life easier, I have able to provide them with a bot that allows them to embed their messages into the channel they provided, purged amount of messages from a channel, moderation commands including kick, ban and warn.
WARP Convoys said: Nathan has completed the project we needed with great haste. He made WARP Convoys a bot with moderation features, and announcement commands. The bot has worked perfectly for us, and suits all of our needs. Highly recommend his projects.

I was first approached by Jogr to create custom Discord Bot back in October 2020 and over the last few months, I have been design and building a bot that allows the user to give the notified log, log discord activity into a channel, provide announcements and moderation commands like kick, ban and warn. The completion of this bot has allowed the community to send professional announcements and allow their discord to be more professional looking.

With the help of Arran, we designed a system which automatically grabs the latest show data every hour and check if the show has finished, if it is, it looks for the Show .mp3 from the recorder and connects to Mixcloud api to upload the show. When the show has finished uploading it POSTs data to the reach site providing our catch up system to show the latest show from that presenter and send a webhook into our discord with that show information and how to listen back. This has reduce the amount of time for one of us to go and manually upload each show and allows our listeners to access that show a few mins after the show finishes.

One part of my task at Reach Radio is to weekly check the meta data database for Unknown Albums and Karaoke songs and manually update them with the correct data. I have designed and build a script which checks our full libary for this type of songs and automatically looks for new metadata to replace it if it finds this data it replaces the meta data with the correct one if it can't find this, it tell me to manually update it. This has reduce the time spend on the task every week and allows us to spend our time else where.

Part of our on-air system is a silence alarm which alarms us if our playout PC or any other issues are happened along our network and notifies us by Email so we can deal with it as quickly as possible for convenience, I have changed this into a webhook which pings users in a discord channel making sure we are awhere and reduce call time as there is not email lag time.